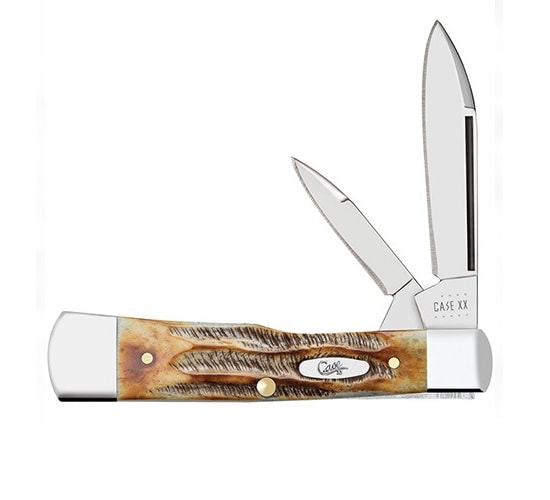 The Spear blade features a symmetrical shape with a stronger blade tip for piercing. This heavy-duty blade is a favorite with farmers and anyone else with some tough cuts to make.

The Pen blade shape was originally designed to cut and sharpen turkey quills for use as ink pens. Today, it still makes a great blade for light-duty work.

Borne from an 18th century jack knife, the Case Gunstock ('130 pattern) measures 3 3/4", weighs 3.3 oz, and features a master Spear blade with a long French nail mark and a secondary Pen blade. Its most prominent feature is its handle shape, which profiles a straight line across the top from its swelled center to the end to create a look resembling the stock found on a traditional shotgun or rifle. Case has offered several different patterns in its history, but two were the most prominent; a small patter ('15 pattern, which measured 2 7/8“ when closed) and this larger version, which was first introduced in the 2004 Case product guide and made very sparingly throughout subsequent years. Its history has made the ‘130 pattern a rare find in today's market, but Case has solidified its future with this reintroduction. Comes conveniently packaged in a box. Made in Bradford, PA, USA from domestic and imported materials.